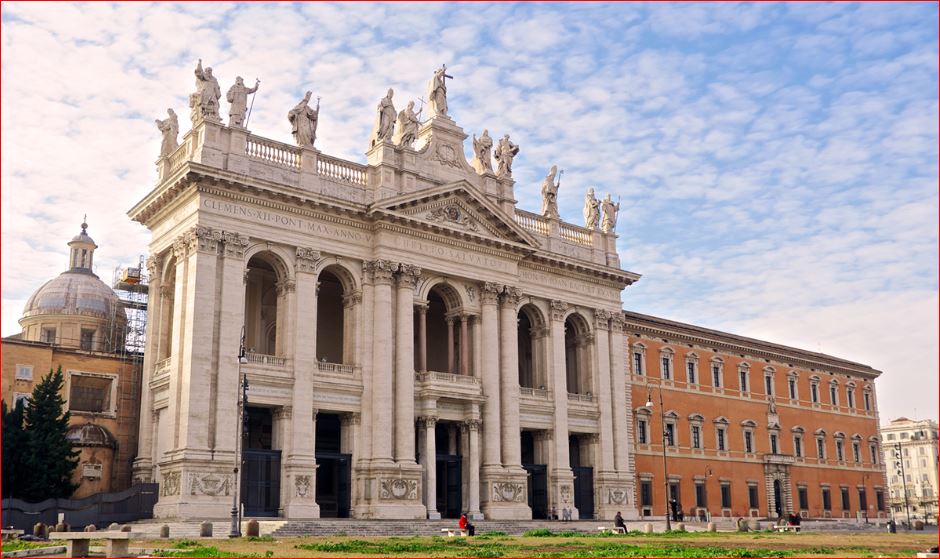 The eponymously named neighbourhood of San Giovanni is defined at its northernmost tip by Rome’s official cathedral, the baroque Basilica di San Giovanni in Laterano. This cathedral, in terms of gilded and marmoreal majesty, gives the Vatican’s St. Peter’s a run for its doubloons and yet, surprisingly, is relatively un-inundated with dawdling tourists, which spares you the four-hour queue that a place like this would usually attract.

A short hop to the cathedral’s south, however, just to the east of S. Giovanni metro station (Red Metro A line) on Via Sannio, are the two best reasons to head to the area. Here each day is a cracking Flea market with vintage clothes stalls selling everything from 1 euro faux snakeskin wallets to fake designer shirts and real second-hand Burberry trench coats.

Directly opposite this market is “Cafe Sannio”, easily this writer’s favourite place in all of Rome. A peculiar, unapologetically unthought-out Italo-Caribbean (sort of) fusion place, you are apt to see – at any given time – the owner, Rafael, merrily skulling cuba libres (and he’s more than happy to share) at one of the tables outside, while mexican music blares out from the speakers.  Sit here after your shopping and get a cappuccino (1 euro) and a portion of lasagne (4 euros). The only place open on Via Sannio at night, Cafe Sannio also has the best view up to the San Giovanni Basilica so, while Rafael mirthfully enjoys the italian gameshows on telly, you can look up at the dramatically lit sculptured saints serried above the cathedral’s pediment. If this doesn’t do it for you – or you want to take your friends somewhere a little more trendy – there is “El Foodie” on Via Sannio’s easterly corner, which plays chic techno music and has slick waiters serving cocktails and prosciutto-canteloupe dishes under chandeliers.

Heading down the main street that dissects the neighbourhood from north to south you are right in San Giovanni’s urban and mercantile heart. Right outside Furio Camillo metro station, for instance, is the Happio shopping mall, which has an H&M and a Decathlon, a sports equipment warehouse selling decent enough running shoes for 20 euros.

Defining the area’s southwesterly side is the vast Parco della Caffarella. While it’s not the prettiest or richly planted park, it does have a creek running down its entire length that attracts a nice variety of avian life and, at the park’s westernmost area, a special doggy nursery-come-pen where Rex can talk politics with his puppy pals (stick to the path to avoid doing a smelly mischief to your trainers).

As the traffic in this neighbourhood looks generally atrocious, it’s advisable to take the metro from any of the stations along the main street (S. Giovanni, Re di Roma, Ponte Lungo, Furio Camillo or Colli Albani, on the red Metro A line). It’s just a short ten minute metro ride from the neighbourhood’s most southerly metro, Colli Albani, to Termini Station.