Prati is remarkable in that it’s an excellent place to be immersed in a genuinely lived-in neighbourhood, whilst still being a very central and well-connected area of Rome. Though it is only two blocks north of the Vatican – and just a short distance to the scrum of tourists and touts – you are sufficiently removed and out of the centre to feel you are back where actual Romans live again. 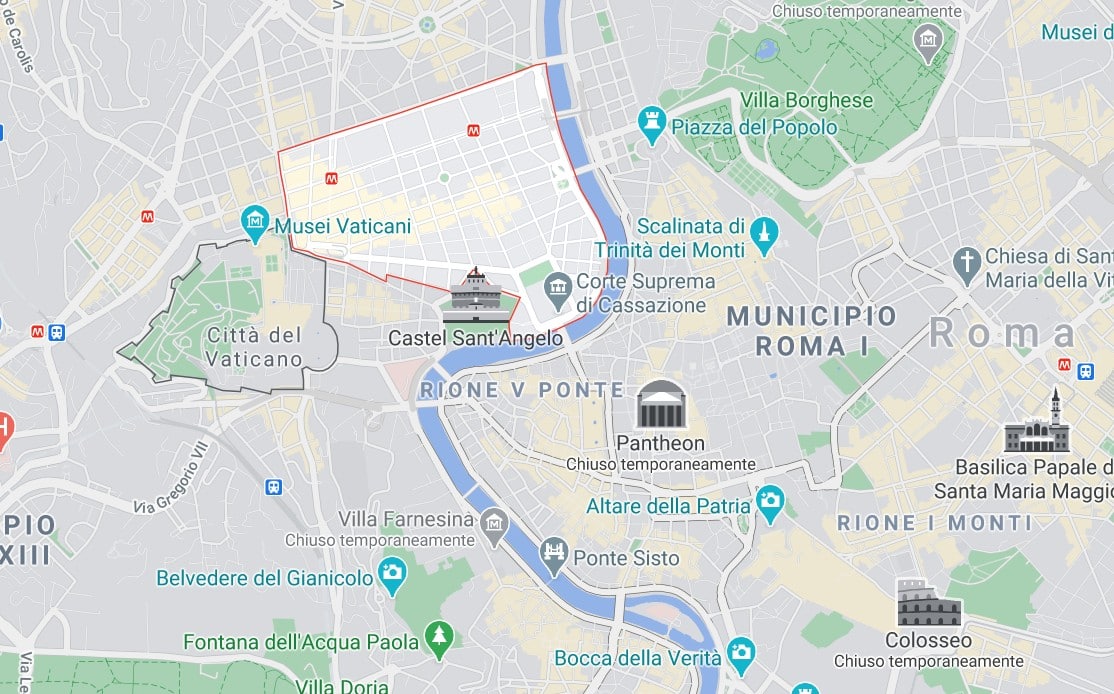 Rather conveniently, however, as it is so near to the touristic hubs, the shops and cafes still contain staff that speak English well enough to ease you along on your ventures but who are also just as amenable to you having a stab at your Italian with them. Only a 20 minute – and sublimely wonderful – walk to Rome’s Piazza del Popolo and Villa Borghese park, this is where the higgledy-piggledy, byzantine streets of Rome’s historic centre first break out into the austere geometry of the grid-form avenues – and the streets here do potentially lose a little charm for this. But the tall tenements are still very grand and attractive, so what the architecture lacks in Mediterranean intrigue is made up for in palatial prettiness and ease of navigability.

The main high street (Viale Giulio Cesare) and the surrounding avenues have a good mix of the authentic and the typically commercial. Whilst, on the one hand, there is a cinema (showing mostly Italian films), plenty of boutique clothes stores and typical cafes and gelaterias (for superb frozen yogurt try Lemongrass, where Via Barletta meets Viale Giulio Cesare), there are also mobile phone shops (Vodafone on Viale Giulio Cesare), the Nike Store (on Via Cola di Rienzo), and a McDonald’s and Burger King (both on Viale Giulio Cesare) for when you “just need them” or when your kid refuses to eat anything else. Additionally, there also very pretty flower stalls always flanking these main streets and the odd market stall popping up on the pavements on the weekends, all for that extra bit of flavour.

Where Prati is really exceptional, however, is for its incredible Indoor Market, where Via Santamaura meets Via Andrea Doria. Here you can browse the huge number of stalls (bakers’, fishmongers’, greengrocers’, butchers’, meat and cheese vendors), each vying for your custom, and pick up exceptional produce for local prices which, again for somewhere so near to the exorbitancies of the tourist areas, is quite noteworthy. For a perfect day, try out your Italian (and work on your vocabulary) ordering from some of the stalls, pick up some fresh baked buns and succulent porchetta (seasoned with sage and fennel) and eat your handcrafted sandwich on the stairs above the market, watching the bustle below.

Across the road (Via Andrea Doria) from the market is La Fiorentina, a good place to take friends for spritz and delicious pastries. This place also does the best coffee in the area and also serves the best plum frangipanes that your humble belly could ever hope to ruminate. Also a little further down Via Andrea Doria to the west is a Co-op supermarket (open until 8.30pm, 8.00pm on Sundays), which is handy as the indoor market shuts at midday.

One block up from Via Andrea Doria (on Via Giordano Bruno) is the small Giordano Bruno Library, situated in the pretty courtyard of a tenement building. A good tip here is – especially in your early days in Rome when getting good wifi can be a pain – is to join the library for just 5 euros for the year and you can take your laptop there, sit in their peaceful space and use their decent wifi for as long as they’re open. For this 5 euros you can also borrow from the good selection of (Italian only) books and DVDs, and there’s plenty of reading fodder here for kids to pick from too.

For transport, take your pick from any of the Metro stations that run longitudinally under the centre of Prati (Ottaviano, Cipro and Lepanto of the Red Metro A line) to be at Termini station within 15 minutes. Alternatively, Prati is well-serviced with buses and trams. For instance, for Trastevere take the 23 bus from Leone Quatro (on Via Leone IV) for 30 minutes down the riverside until you reach Tiber Island (Isola Tiberina). Alternatively, you can head north for 20 minutes on the 32 bus (from Via Barletta) for the Olympic Stadium and Ponte Milvio.

For furnished apartment rentals in Prati look no further.