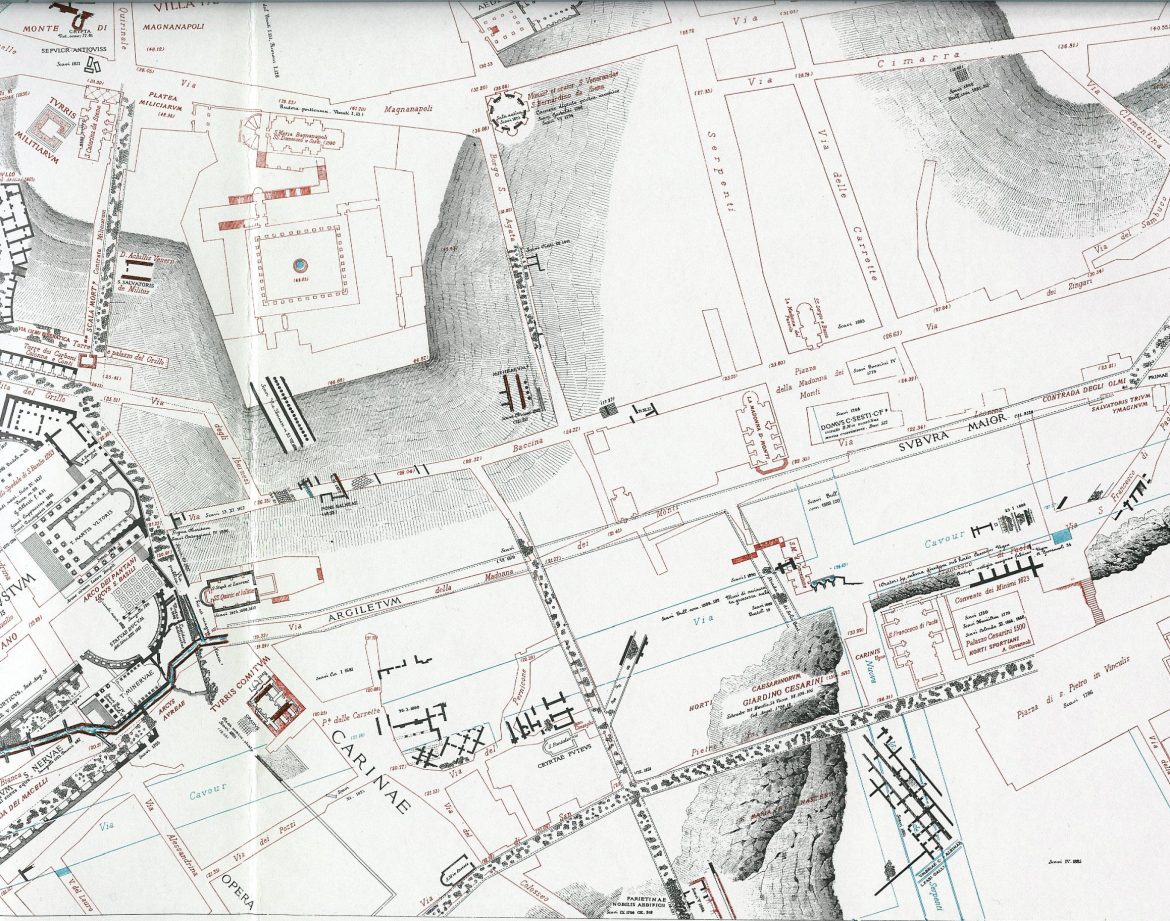 An ancient suburb called Suburra near nowdays Esquilino. It was the a low class red light district of it’s day. Julius Caesar lived there until he was elected pontifex maximus at the age of 37.

Owes its name to the Latin trivium, which indicated the meeting of three streets in the Piazzetta dei Crociferi, located not far from the current Trevi Fountain. The medieval city took its origin from this area.

As you can easily imagine, the name derives from the presence of the Column of Marcus Aurelius placed precisely in Piazza Colonna.

Of the ancient Campo Marzio, which also extended over the current Pigna district, the name and the presence of green areas (the Pincio) do not remain much longer apart.

Owes its name to the Sant’Angelo bridge, originally belonging to the district until it was incorporated, by the will of Pope Sixtus V, to the new Borgo district. It is the most densely inhabited district in ancient times, and also the only one that has maintained an uninterrupted housing presence from the city’s origins to today

To this district belong the famous squares Navona and Campo de ‘Fiori. In ancient times it was very rich in celebratory monuments and it owes its name to these (from the Latin pares meaning “wall”)

The characteristic square from which it takes its name is also the origin of the dense urbanization that had already taken place in this area in ancient times.

This is probably the most touristic and popular district, despite being the least populated. This happens because of the many institutional realities present, to which the Campidoglio and the Roman Forum are annexed. The name probably derives from the Latin campus telluris, that is a dirt road.
Sant’Angelo: this district, which houses the Jewish ghetto, is the smallest in Rome and owes its name to the church of Sant’Angelo in Pescheria.

The name suggests the location, near the bank of the Tiber near the Isola Tiberina.

One of the most famous districts, especially for its nightlife. Since ancient times the right bank of the Tiber has hosted the main shops and was one of the hearts of the city’s commercial life.

Located on the right bank of the Tiber, it has the typically medieval characteristic of naming its streets “villages”.

The foundation of the Esquilino dates back to 1870 and owes its name to the hill on which it extends. In ancient times this area was located outside the walls, until it was annexed to the city in the Augustan age. The name derives from the Latin ex colere, literally “inhabiting out”.

Fellini’s Dolce Vita has contributed to making the Ludovisi district known to the entire world, which in the Renaissance hosted many noble villas, including Villa Ludovisi.

Of the Horti Sallustani, the sumptuous gardens built by the emperor Sallustio in the first century BC, all that remains is the name. It is located on the northern side of the Quirinale hill.

Characterized by the presence of the Termini station, it hosts important arteries of communication and commerce.

Worldwide known as the district hosting the Colosseum, it recalls with its name the presence of the African legionaries led by Scipione, stationed on the Celio hill.

Owes its name to monte testaceus, a huge accumulation of debris due to the port of Ripa grande in ancient times.

The most recent district (even if it was an already urbanized village) and housed the homonymous monastery that for centuries constituted the only inhabited presence.

In the imperial era this area hosted vineyards and cultivated fields, the so-called horti. It is adjacent to the Vatican.