Which will be Crowned the Best Expat City?
Advanced Search
Your search results

Which will be Crowned the Best Expat City?

Italy is one of those countries where there really isn’t a bad place to live. Each city and town, no matter how big or small, has its own charm and its own traditions which can make deciding where to live even more of a challenge. While many prefer to settle in smaller places and soak up that authentic Italian culture, we’re going to be focusing on Italy’s biggest (and most international) cities, Milan and Rome, to see which will be crowned the best city for expats. Who will be victorious? You decide!

Italy’s second largest city is renowned as the capital of business and fashion! It holds many treasures within its streets, and it is definitely a must-see but is it the place to live? Let’s see!

Why should you move to Milan?

As we’ve already heard, Milan is indisputably the fashion capital of Italy. It’s home to many international fashion brands and boasts one of the most famous fashion weeks in the world. There’s rarely a dull moment!

It’s also well-established as one of the business capitals of Europe and hosts many company headquarters.

There’s no shortage of activities to do here as it’s packed with museums, parks and churches all just calling out to be visited!

It’s got excellent transport links both inside and outside of Italy. Milan has three airports pretty closeby which makes it perfect for expats. It also has great bus and train connections so you can easily travel around Italy.

It has an excellent public transport network (which is continually expanding) including metros, buses and trams that connect the entire city.

Milan has a lot of job opportunities especially for expats as it’s the most international city in Italy. This means that you can find a job in a company or try your hand at English teaching as there’s a high demand!

The city’s nightlife has made it a favourite with students and professionals alike. There are lots of bars and pubs around the city as well as some areas that are particularly popular like Navigli, Colonne di San Lorenzo and Moscova.

All in all, Milan is a pretty modern city that is constantly evolving and changing. It holds a certain charm in the way that it blends the old with the new!

Milan is a truly international, metropolitan city where life is fast-paced and there is always something to do! Enjoy a stroll along the Navigli and grab an aperitivo with your friends.

What are the downsides of living in Milan?

If you are planning to move to Italy and you’re dreaming of the weather, Milan might not be the place for you. Being in the north, the weather is quite changeable. Just be prepared for every eventuality and come armed with an umbrella and sun cream!

As you can imagine, being the capital of fashion and business, Milan can get pretty busy. If you want the quintessential Italian atmosphere, this isn’t the city for you! It’s widely regarded as the least Italian city in Italy.

Milan is a modern city but it’s a double-edged sword as it isn’t as historical or beautiful as Rome. It’s definitely not as scenic or picturesque to stroll through!

It can be pretty expensive! As with any large, metropolitan city, there’s always a price tag so just be prepared to pay a little more! Especially when it comes to renting and buying properties, you’ll pay a crazy price.

When you think of Italy, the first thing that comes to mind is Rome! It’s undeniably the capital of culture and draws in hordes of tourists but is it more than a holiday spot? Is it a good place to settle down? Let’s see! 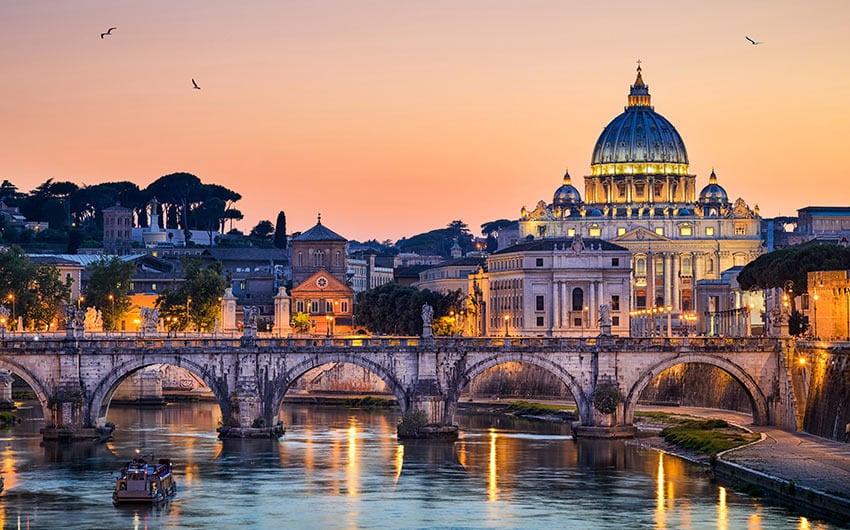 Why should you move to Rome?

Italian food needs no introduction and the food in Rome is second to none! Try a classic carbonara or a tasty cacio e pepe and you’ll never want to leave although, your jeans might not thank you.

Every day is like a holiday! This might be the biggest positive about living in Rome as you’re sure to step outside every day and look around in disbelief at the beauty of the city.

It’s the cultural capital of Italy (if not Europe). With a plethora of museums, monuments, churches and parks, you’ll always have something to do!

There are so many activities on offer, and you can easily take day trips from Rome to other Italian towns and cities.

When it comes to job opportunities, Rome does have a lot to offer especially in terms of tourism and economy as these are two booming industries. If you’re a young, native English speaker, you’ll probably be able to find a job.

You’re guaranteed to have great weather in Rome apart from the intense summer heat! With its mid-country position, the changes in weather are less severe.

This city’s nightlife is popular among Italians and expats alike. There is no shortage of pubs and bars that can meet any budget.

There are many shops as it’s a popular Italian past-time and you can find everything from cheaper markets to luxurious designer stores. It’s really cool to stroll through the streets and admire the shops!

What are the downsides of living in Rome?

Beyond the city centre, the public transport links aren’t great which means that there are more cars on the road leading to some pretty chaotic transport. You’ll also find that public transport is really busy due to the number of tourists!

Just like Milan, Rome can be expensive especially if you fall into any tourist traps! Trying to find cheap rentals is extremely difficult and you’ll usually find yourself settling far from the centre.

Being beautiful and brimming with culture comes at a price! You’ll find that Rome is extremely chaotic and filled with tourists which means that moving around the city can be a challenge.

Although, Rome is full of culture and beauty, it also has its issues! There are potholes and graffiti everywhere which doesn’t quite fit with the quintessential Italian vibe you expect. There’s also a real problem with the binmen so rubbish often piles up which for residents really isn’t ideal.

As much as there are jobs in select fields like teaching and tourism, there aren’t many opportunities for over 30s. This makes it a little difficult for older expats to settle here and is why you’ll often find youngster expats moving on.

Which is the best?

So, now that we’ve laid out the pros and cons, it’s time for you to decide which city is the best for expats! Let us know in the comments who you think comes out on top.