Best Areas to Live in Dublin

Best Areas to Live in Dublin

In this article, we will analyze the areas of Dublin that can be suitable for your stay and help you have a general idea about the city. Let’s start with a bit of information about Dublin.

Dublin is a thriving city with a rich history. It has a very compact center, just take a 10-minute bus ride from O’Connell Street or College Green and you find yourself traveling through a patchwork quilt of villages and towns, each with their own individual character. The city surely offers a fascinating mix of local styles and atmospheres. 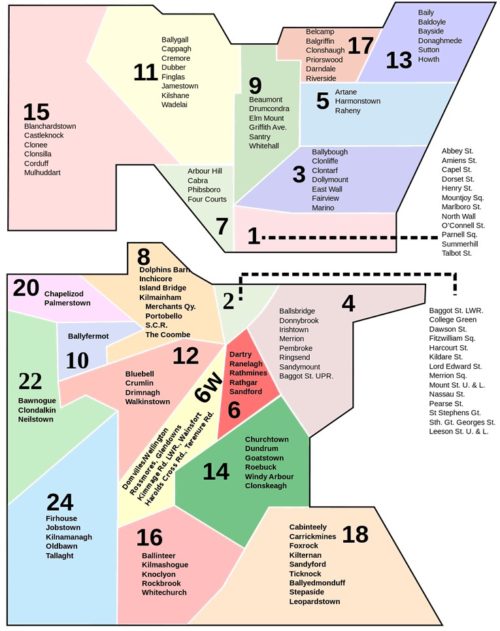 A handy hint if you are trying to locate an address, postal codes are always odd numbers on the Northside and even numbers on the Southside. (the Liffey River divides the city) As a rule of thumb, the higher the number, the further away the location will be from the city center.

If you would like to cover some distance, then Dublin has a great public transport network with a choice of buses, two tram lines (the Luas), a local area train running all the way along Dublin Bay (the Dart), and a large number of taxis.

Also, If you would like to get some opinion from an expat’s eye, check out this article! 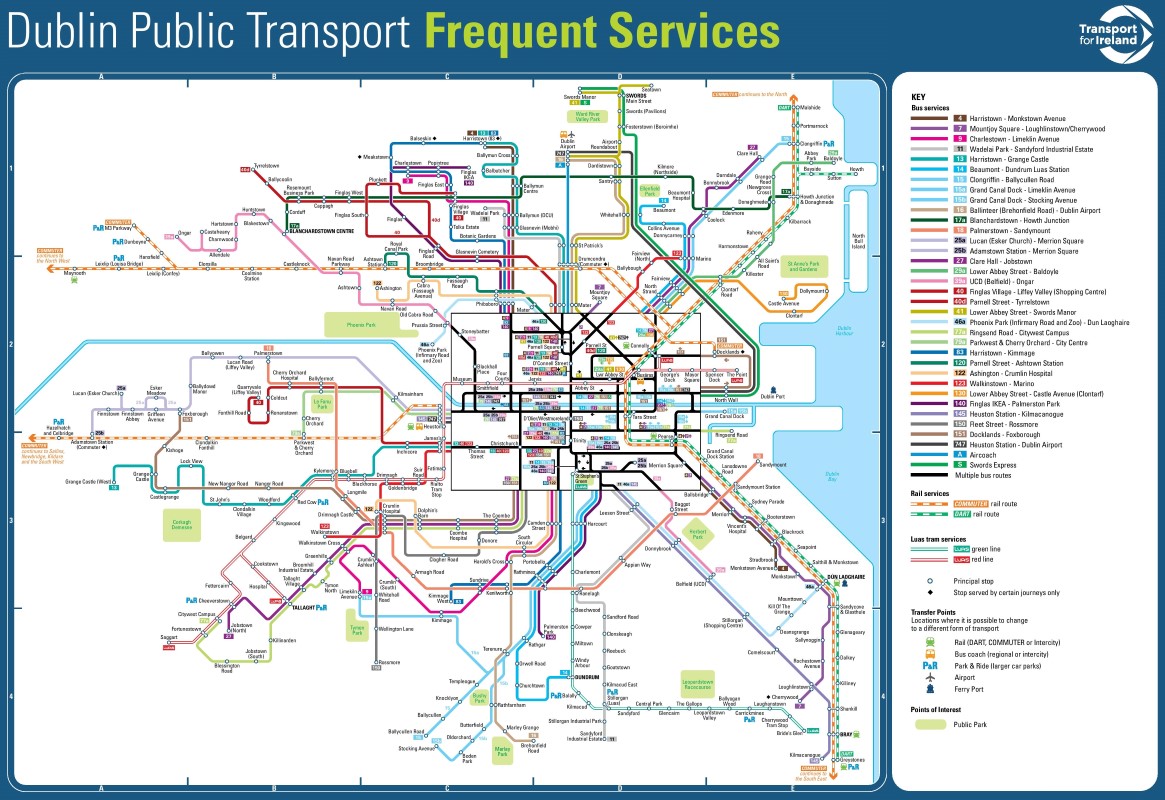 We can comment on the map of Dublin to help you have a general idea:

In the port areas, Dublin 4 and Dublin 7, there are lots of new affordable flats, but there is fewer things to do. There are fewer shops and the streets are very quiet, and Dublin 6 is the area with more students.

Finally, like in all cities, there are areas you should not visit: O’Connell street and the surroundings in the North for example. So, let’s start by analyzing a bit of the city to decide where to live depending on your profile.

For a city of a million inhabitants, Dublin has a very intimate and compact city center. Narrow lanes, pedestrian zones, and covered markets invite you to take a stroll and go exploring. 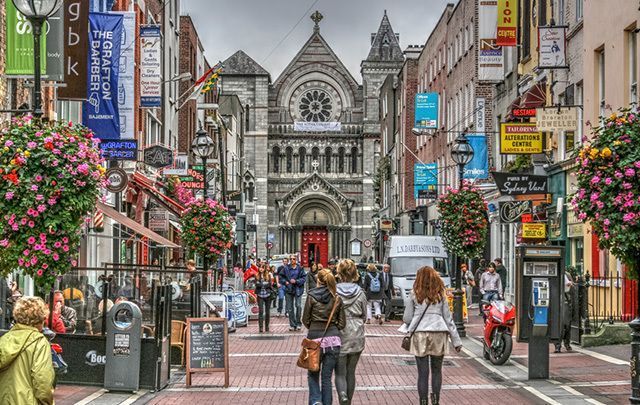 There is only one grand avenue in the center and that is O’Connell Street. The rest of the streets is much more human in scale. Few buildings in the city center are more than four stories high and an appealing mix of 18th century Georgian and 19th-century Victorian styles dominate most streets in the center. Life in Dublin’s city center is charming, slightly chaotic, and fairly laid back.

For those who prefer to live here, the area is full of English academies, restaurants, colleges, supermarkets and everything you need, literally, you can reach on foot!

Dublin Docklands has become one of the most sought-after places to live in Dublin City.  Only a short distance from the City Centre and surrounded by all the amenities and services the city has to offer, the area has proved hugely attractive to those seeking a home close to the center in a thriving and bustling area. 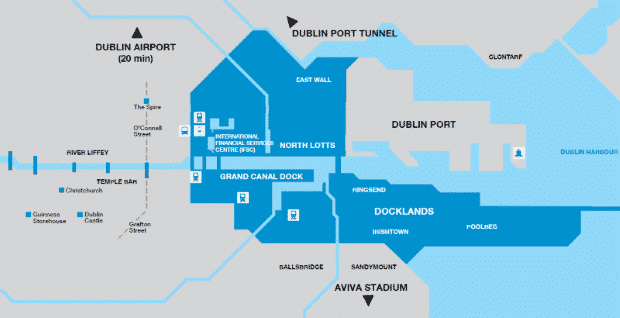 There is a rich multicultural mix in the Dublin Docklands, with 55 percent of the population born in Ireland, 20 percent in other European countries, and 16 percent from the rest of the world. Docklands has been one of the most important factors in raising the profile of Ireland internationally and in attracting the world’s top companies to Dublin. Some 40,000 people work in the area and there are 14,000 households there.

Just a century ago, Ashtown wasn’t there. The area to the north of the Phoenix Park was mostly agricultural land populated by cattle or crops. It was in the middle decades of the 20th century that the residential districts on either side of the Navan Road were built; tidy streets whose homes were mostly given generous gardens, front, and back. 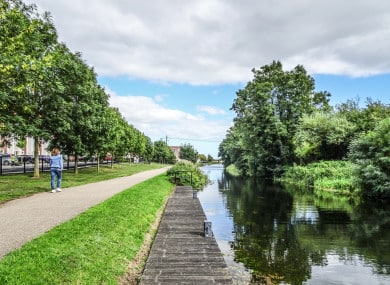 There’s also been a lot of new development in recent years – primarily across the canal in Rathborne and Royal Canal Park, but also at the western fringe of Ashtown by the Halfway House and Phoenix Park Racecourse.

It’s a very settled area, with some older residents having lived there since the houses were new. But in recent years it has seen an influx of young couples and families, drawn by the good houses, gardens, and prices not quite as eye-watering as those in nearby areas. From the geographic center of Ashtown, roughly where Baggot Road meets the Navan Road, it’s a 10-15 minute drive into town – or 20 minutes on the bike.

Located on the North side of the River Liffey, Stoneybatter is Dublin’s original inner-city urban village. Stoneybatter is currently home to screen-printers, gallery spaces, an independent publishing house and bookshop, a lithograph workshop, and a recording studio. If you are looking to experience authentic Dublin culture, then this is the perfect place to start. 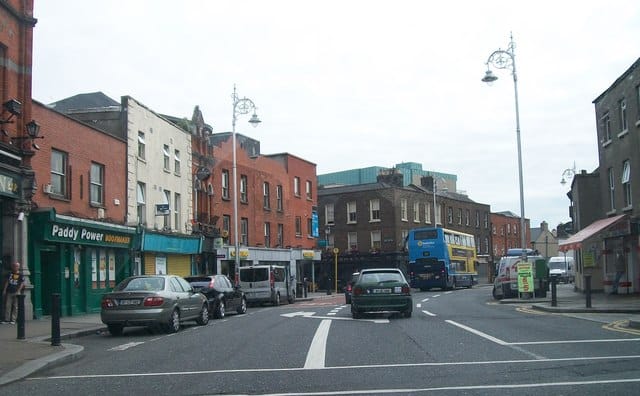 Community-wise, Stoneybatter blends young families, many new to the area, with residents of several generations’ standing. It also has a healthy dose of students, with the new Grangegorman DIT campus set to add many more.

Easily the best thing about living in Stoneybatter is despite its very handy proximity to the city center, it retains an amazing everybody-knows-everybody village vibe. The media often focus on the trendy coffee shops, pubs, and food – but behind all these is another local who probably knows your name, and your child’s, and your neighbors and the dog they’re looking after. People here are proactive with voluntary and community stuff. Whether they’re running a cult film night at the Lighthouse, history tours, festivals, playgroups, workshops, street cleans, or simply lending a neighbor a hand, everybody seems to be making it a better place to live or visit. 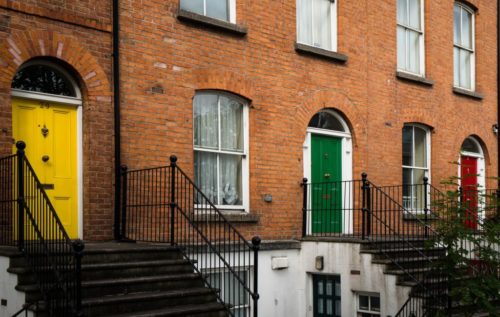 These areas can also satisfy your needs because you can find hundreds of bars, restaurants, and supermarkets here. Dublin 6 is also probably the most popular, especially with quiet and pleasant areas such as Rathmines, Ranelagh, and Rathgar which are located just a few stops away from the city center. You can also find nice rooms at fair prices; all you need is a little bit of luck! 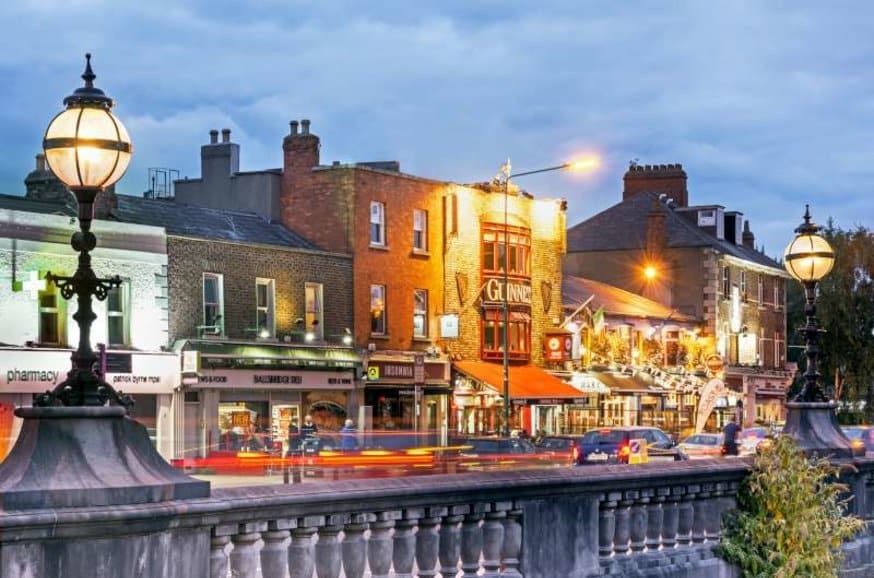 Ballsbridge is arguably Dublin’s most exclusive address. Streets such as Shrewsbury Road and Ailesbury Road boast the highest real estate prices thanks to their quality of environment and flats. The area has traditionally been home to many foreign embassies in Dublin. It is not hard to see why the rich and powerful come to Ballsbridge: Originally developed in Victorian times, the streets are wide and tree-lined, and houses are substantial and set back in vast private grounds. Of all Dublin areas, Ballsbridge has the least built-up and most ‘private’ feel. Yet, despite space and relative tranquility, Ballsbridge is only minutes away from the city center! 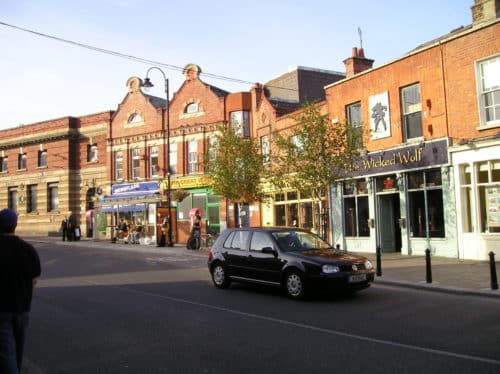 Blackrock on Dublin’s Southside is a town of curious contrasts. The seaside town overlooks Dublin Bay, but the view is marred by unsightly railway tracks. Blackrock boasts desirable residential areas and the country’s best-known private hospital. Blackrock’s bohemian side comes to the fore in its large number of small art galleries and a weekend market that attracts shoppers from all over Dublin.

A swift Dart train connection with the city center makes Blackrock a popular residential area with families looking for some fresh sea air. 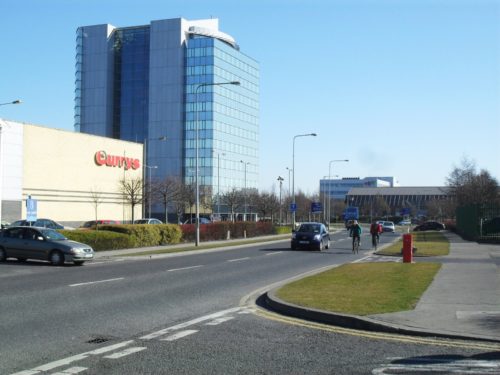 Blanchardstown is the seat of Fingal county council which administers the largest area in all of County Dublin. The town lies 10km North of Dublin on the N3 motorway. Similar to Tallaght, Blanchardstown was a rural village until it was turned into a commuter town for the fast-expanding city of Dublin in the 1970s. Blanchardstown’s two main magnets are a large shopping center and the council offices. Blanchardstown benefitted from having most of its development which results in an overall more sympathetic urban landscape. 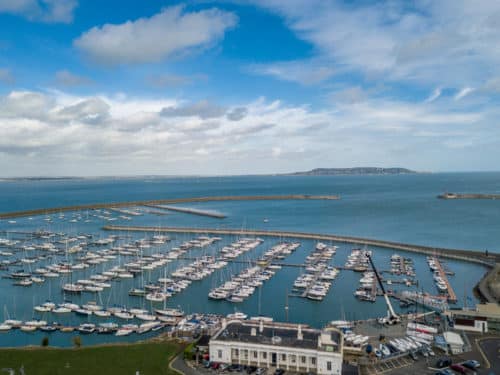 County Dublin is much larger than the city of Dublin itself and stretches from the coastal town of Balbriggan in the North to Shankill in the South. Even though half of the County’s area is located to the North of the city, the term ‘County Dublin’ is most commonly used by Dubliners to describe the commuter towns and coastal villages on the Southside. 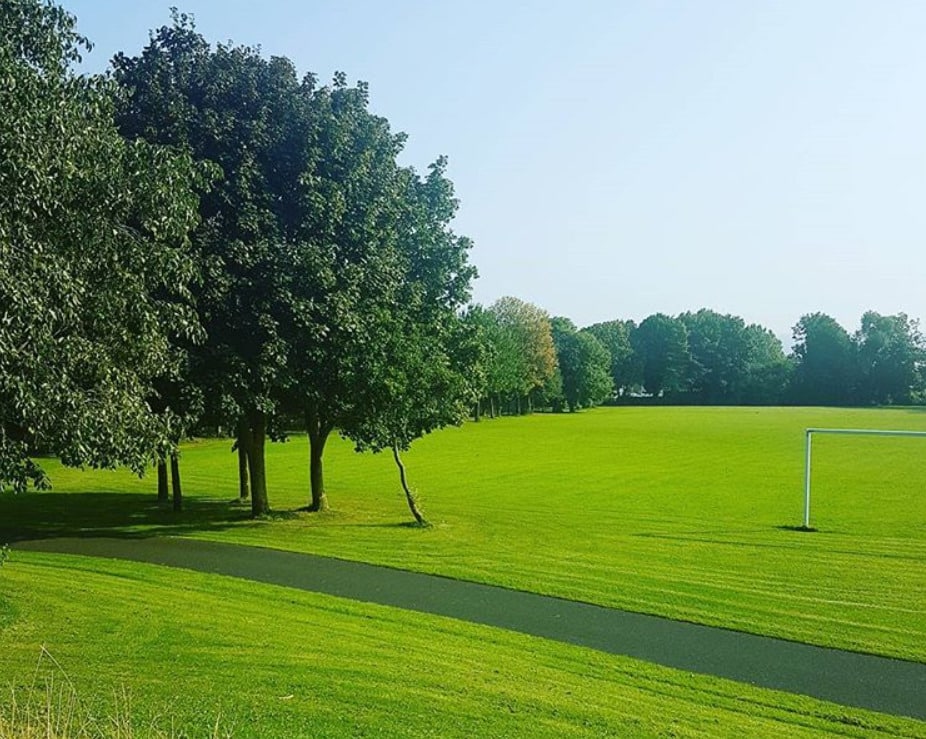 About 80 years ago, Walkinstown was a dairy farm. It was originally called Wilkinstown after a man called Wilkins, said to have been a farmer in the area in the 15th century. It stopped being a farm in the 1930s, when a major program of house building began – both social housing built by the Corporation and privately purchased homes. Today, it is a suburb of mature housing estates, many of them centered around a green.

Walkinstown is a mature and settled area that has seen a lot of families grow up and is now welcoming some new ones. Thanks to the way the estates were built, it has more green space than many Dublin neighborhoods, and it’s not one where new developments have outrun the local amenities. It’s more affordable than many places also. 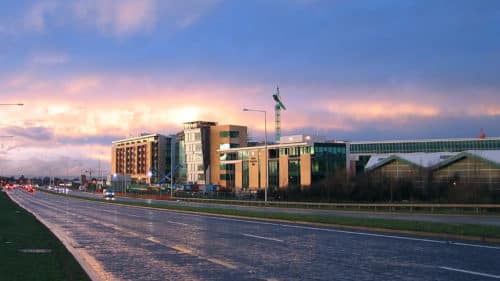 Once an office park by the side of the motorway, Sandyford now has a Luas tram connection into the city center, the Beacon shopping center, and Dublin’s first museum for children.

The two most likely reasons that will bring you to Sandyford are business or shopping. The Sandyford Industrial Estate and the Beacon South Quarter shopping district lie within the M50 while the residential areas, misguiding referred to as Sandyford Village, lie outside the M50 if seen from Dublin.

That’s the end of our recommendations, hope you have a great stay in Dublin!